RoboTwin: Motion imitating robotics as an alternative to classic automation

From applied research to working prototype and a growing start-up. The story of RoboTwin s.r.o., a Czech start-up focusing on industrial automation through motion tracking and imitation, seems to have all the ingredients to get a happy ending. However, no start-up can hope to traverse the rocky road to market alone. Read here how industry gave the impulse for RoboTwin’s technology and how the support of the European Institute of Innovation and Technology (EIT) and EIT Manufacturing was instrumental to the start-up’s success.

Many ways lead to a start-up. For some people, entrepreneurship is a calling. Megi Mejdrechová, a Czech engineer, does not put herself into this category. If you would have asked her a few years ago, she probably would have said that nothing appealed her to entrepreneurship. She enjoyed the analytical and technical nature of the engineering field: “I really love technical tasks, development, solving challenges, and making something work”. In 2020 she co-founded RoboTwin, the start-up of which she is also CTO and builds on the technology she developed during her studies.

One question was instrumental in her decision: was she creating anything useful, which improves industry, the environment, or people’s lives? At the end of her studies, she realised that she held the answer to this question in her hands: “after graduating I had the chance to work on my own innovation, which I believe has the potential to make the manufacturing industry a better and safer place”. The power to follow her own beliefs and create a positive impact eventually made entrepreneurship attractive to her.

Being a young woman in the male-dominated high-tech field seems to add to the challenge. However, Mejdrechová does not see it that way: “I think it can be an advantage. You’re more visible, people are interested, and you can be part of a powerful women co-founder community which is very supportive and welcoming.”

In 2019, a Czech spray painting company approached the Czech Technical University. The company’s purely manual processes meant that employees would spray paint entire series of products by hand – a laborious, dirty, and unhealthy job. Furthermore, these processes are unscalable, and the company had to decline orders due to a lack of workforce. Since they did not find a suitable solution on the market, they turned to the university. It quickly turned out that most small and medium-sized paint shops, of which there are 250 in Czechia alone, still manually paint using a spray gun. Many want to robotise their production, but the specialised nature of their offering meant that this is either not possible, or expensive and inefficient.

Mejdrechová, who was a student at the Czech Technical University at the time, took up the challenge of developing a solution. Her goal: to help automate a manufacturing industry still reliant on a human workforce, and thus reduce the number of hours these people spend in unhealthy or even toxic environments doing repetitive tasks. “I was very excited about this topic and took this very seriously. It was simply not acceptable to me that so many people are still working in such conditions,” says Mejdrechová.

She designed a way to robotise small-scale industrial painting easily and efficiently: “with the support of my supervisor, I tried out this motion tracking-based approach. We consulted with the paint shop, which helped me a lot to focus on a user-friendly solution”. Eventually, a prototype was successfully tested directly in a painting cell. It is on this technology that RoboTwin’s solution is based.

An alternative approach to automation

Automation is not a new thing. Many industries have developed and adopted automation techniques – a classic example is robots working at conveyor belts. This approach to automation replaces trained workers with “generalist” robots. For specialised tasks, such as spray painting or coating, this means replacing experienced and skilled specialists. The robot that’s replacing them has no knowledge about the task, and the programmer is unable to create a suitable program since there is nobody to tell him how this task should be done.

RoboTwin provides an alternative approach to automation based on motion tracking and imitation. While an experienced worker demonstrates how the paint job is done on the first product in the series, RoboTwin tracks their motion and processes this data into a robotics program. The robot is then able to imitate their exact motions and can finish the other products in the series. 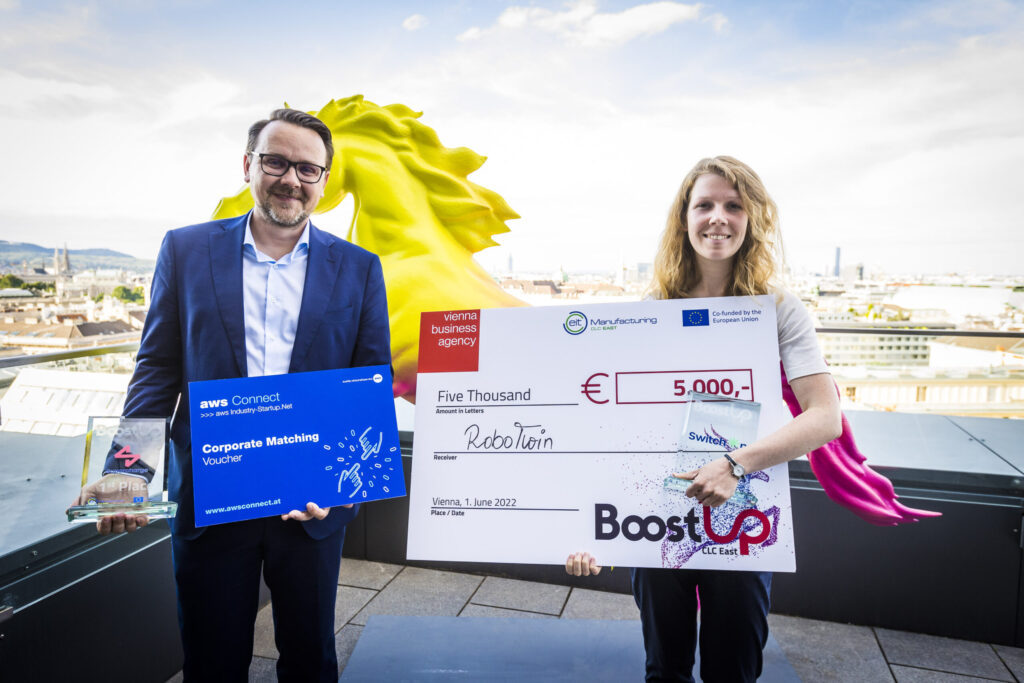 As a student researcher, Mejdrechová never gave much thought to technology transfer or the gap between technology and industrial practice, but she received a lot of positive feedback from paint shops and heard their wish for such a product to exist. It was the realisation that the solution she developed would probably not get the chance to help them unless she did pushed for it herself: “eventually, it was my friend who convinced me that no one else but me, who brought the project up to the stage of a prototype, has the highest chance to push it towards a successful end,” remembers Mejdrechová.

A team of three, including Mejdrechová and her friend, joined EIT Jumpstarter, a pre-accelerator program organised by European Institute of Innovation and Technology (EIT), a body of the European Union. The team ended up winning the Grand Final. With this confirmation of the technology’s potential, they subsequently officially established RoboTwin s.r.o. The learnings and support from EIT Jumpstarter turned out to be invaluable for RoboTwin: “looking back, participating in the EIT Jumpstarter programme was a game changing experience for us. It helped us validate our plans in the early stage and gave us very good advice on what to focus on further”.

The team noticed that gathering feedback from their customers before and during development is not only essential for development; it also cultivates relationships. Before launching, Mejdrachová recommends drawing on the expertise of seasoned experts: “to create an informed outlook, it is necessary to find mentors and experts that are willing to help. We were lucky to gain support from EIT Manufacturing CLC East. Their support is priceless”.

EIT Manufacturing is one of EIT’s nine so-called Knowledge and Innovation Communities (KICs), which brings together businesses, research centres and universities to strengthen cooperations in the European manufacturing ecosystem. EIT Manufacturing’s Co-Location Center (CLC) East, based in Vienna, is one of six innovation hubs and services seven countries in Central and Eastern Europe. 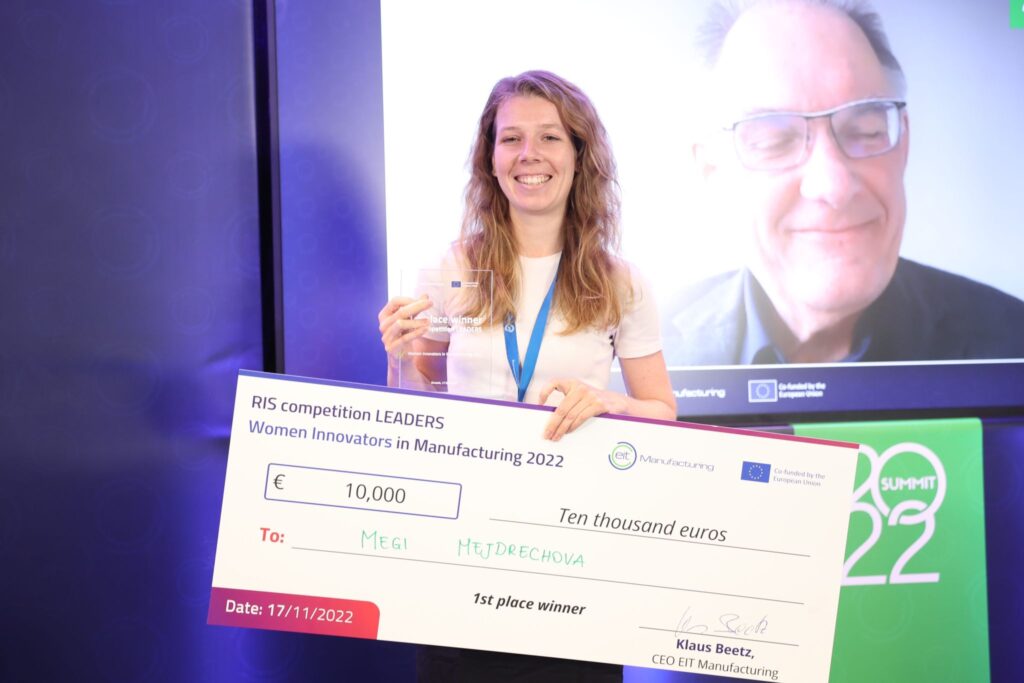 In 2022, the RoboTwin team spent five days in Vienna as part of the Discover Vienna: Manufacturing Edition programme during the ViennaUP’22 start-up festival. The programme brings promising start-ups of Central and Eastern Europe to Vienna. It consists of networking and meet-and-greets with corporate representatives, incubators, and successful founders, as well as a pitching competition. “Discover Vienna broadened our horizons tremendously. We exchanged experiences with other start-ups sharing our difficult path and got some very practical tips,” says Mejdrechová. “Especially since RoboTwin is a very young start-up, we value opportunities to present ourselves and validate our plan while pitching in front of an expert jury. My stay in Vienna was very enriching”.

During Discover Vienna, RoboTwin competed in BoostUp! East, the regional edition of EIT Manufacturing’s competition for start-ups and scale-ups. They took home the first prize in the SwitchOn category – the competition for early-stage start-ups.

As part of the Discover Vienna: Manufacturing Edition, RoboTwin received two-month long support from EIT Manufacturing. This support is suited to individual start-ups’ needs. For RoboTwin, the focus was on the development and deliverables of a business development strategy, including a business plan, profit and loss sheet, cashflow sheet and their pitch deck. This support proved valuable for the Czech start-up: “EIT Manufacturing has experience with business creation, they know the European market and understand the needs of a high-tech start-up. We trust them and discuss our doubts openly and to the point”. In 2022, RoboTwin was selected for, and went on to win, EIT Manufacturing RIS LEADERS. LEADERS is a competition under the Regional Innovation Scheme (RIS) for women innovators in manufacturing operating in European countries with moderate to modest levels of innovation.

Closing the gap between prototype and market

RoboTwin applied for EIT Manufacturing’s Call for Proposals 2023, which supports innovative manufacturing-related projects in the prototype stage, with the aim of launching products to the market in one year. According to Mejdrechová, the Call for Proposals 2023 is an incredible fit for RoboTwin: “our vision is to build an outstanding product that not only extends our prototype and fulfils the market’s needs, but is something that initiates our journey towards a sustainable company”. Participants in the consortium, which was formed by RoboTwin, provide the start-up with the needed experience and expert knowledge.

Co-founder and CTO Megi Mejdrechová firmly believes that the future for RoboTwin is bright: “every year I spent working on our project was more exciting than the previous one. I believe that, thanks to the various means of support from EIT Manufacturing, we have everything to keep this trend going in 2023. The provided funding could give us an exceptional boost to achieve our goals and fulfil our dream – to bring RoboTwin to market and enable the automation of difficult, unhealthy, and repetitive jobs in manufacturing all over the world.”